Back to all
Prev Next 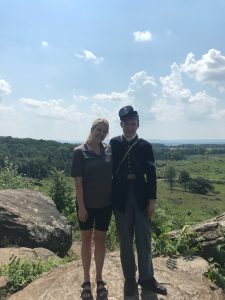 On July 16th, the National History Academy traveled to Gettysburg, PA to learn of the three-day battle in July of 1863 that is arguably the pivotal battle of the Civil War.  Students went on a guided tour of the National Military Park seeing numerous memorials including the North Carolina’s, Pennsylvania’s, and the Eternal Light Peace Memorial dedicated on the battle’s 50thanniversary in 1913.  Students learned of Union Colonel Joshua Chamberlain’s heroic stand at Little Round Top on day two and stood on the ground where Confederate General Pickett began his desperate charge against the Union center on the third day.  Students also toured the Gettysburg Museum and viewed Paul Phillippoteaux’s “Cyclorama” – a 377 foot long, 42 foot high, 360 degree, oil painting of Pickett’s charge.  In addition, the Academy visited President Eisenhower’s home which is also in Gettysburg.  That evening, students watched the 1993 epic film “Gettysburg” and had a Q and A session with the director Ron Maxwell.

On July 17, the Camp had a tour of Gettysburg College and the ventured to the Seminary Ridge Museum. The Seminary served as a hospital during the Battle of Gettysburg.  The Academy next traveled to the Antietam Battlefield in Sharpsville, MD.  Here we had a tour of the Confederate General Lee’s first foray into Union territory.  The 1862 engagement was the bloodiest battle in U.S. history, and resulted in President Lincoln issuing the Emancipation Proclamation.  Students saw the Dunker Church, the Corn Field, and walked the Bloody Lane. 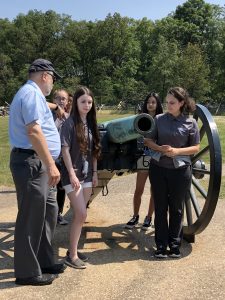 After returning to Foxcroft and having dinner, students engaged in a question and answer session with former Federal Election Commissioner Trevor Potter on voter confidence, campaign finance, and electoral fairness.

The Power of Place-Based Learning

One of my favorite things about winter are the footprints you make in the snow after a fresh (...)

Sign up to receive news, updates and other exciting developments about the National History Academy.