Back to all
Prev Next

A Trip to the White House

Many would hear about “A trip to the White House” and expect some extravagant series of hijinks filled with Presidential sightings, First Ladies in their element, and maybe even a run-in with an unfriendly security guard–it almost makes it seem like a nature documentary. And while this White House experience was extravagant in many ways, it offered something that many would not expect given the political climate these days: wonder and peace. Being able to walk through the very building where so many famous Presidents have made their marks–as well as their mistakes–was something that captivated the many history nerds at this camp, including me.

After thankfully getting through a line out in the D.C. summer sun, things picked up quickly. Passing through security check after security check, including a mandatory drug search that starred one very tail-wagging and tongue-panting good boy, we all made it actually into the White House with surprising ease and efficiency. And if I may say so myself, it starts off strong. For the avid history nerds who eat, sleep, and breathe the actions of our predecessors, many of us quickly recognized the library in which Robert F. Kennedy negotiated the removal of missiles from Cuba back in 1962. That alone could have made my day, especially because it looked exactly how I imagined it. My sister and I looking at the picture of Jackie Kennedy in the Vermeil Room across the hall and realizing that she looks almost exactly like our aunt added a layer that warranted a later conversation on the validity of past lives. 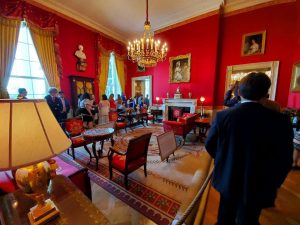 It’s always good to follow up something great with something greater, and the White House did exactly that. I was already impressed by the three rooms downstairs, so the rooms upstairs sent me over the edge. The East Room and the three colored rooms had a wow-factor I never thought possible. The East Room and Blue Room held so much weight for my sister, as those were some of the crucial rooms where Jacqueline Kennedy strategically entertained so many guests to promote her husband’s efforts. Meanwhile, with James K. Polk being my favorite President for reasons too long to list, walking into the Red Room put me over the room. Walking into the very room that Polk and his wife, Sarah, established to greet guests for parties–the exact room that I used a backdrop for one of the National History Day performances that I hold so close to my heart–I was simply in awe. It was the room. Not just a picture. Not just a description. It was there. I was in it.

Our trip to the White House was simply emblematic of the National History Academy experience as a whole. Not only did it feature getting to see important locations for our nation’s today, yesterday, and tomorrow, but it placed us in them, existing amidst the paintings and architecture and history rather than simply looking at it projected onto a classroom wall. On top of that, it meant something to each of us. One of the characteristic things about history nerds is that we all have our own unique passions and favorite aspects of history, and the White House catered to all of that, standing as the hearth of so many of our favorite moments of the past. Whether it was my sister tearing up at East Room as she pictured Jackie Kennedy moving from table to table with her picturesque smile, or my chest swelling as I stood before the Library and thought “This is where it happened,” or even the vicarious enjoyment that we both felt for each other as we went through the Blue Room and Red Room–it all meant something to us. It held a special place in our hearts as it gave us closure to what we already knew and opened us up to learning more. Because at the end of the day, that is what the White House trip was all about, and that is the National History Academy experience.

The Power of Place-Based Learning

One of my favorite things about winter are the footprints you make in the snow after a fresh (...)

Sign up to receive news, updates and other exciting developments about the National History Academy.